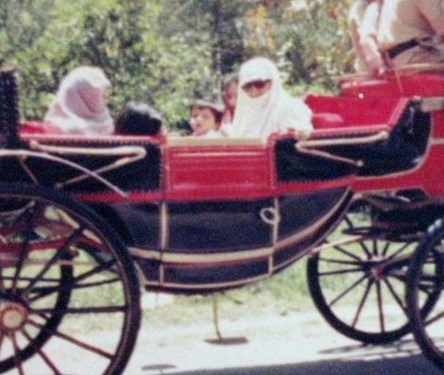 A Short Message for Dr. Tayyaba
by
Dr. A. R. Ahmadi sahib in a letter before her marriage
The Prescription for a Happy and Successful Life 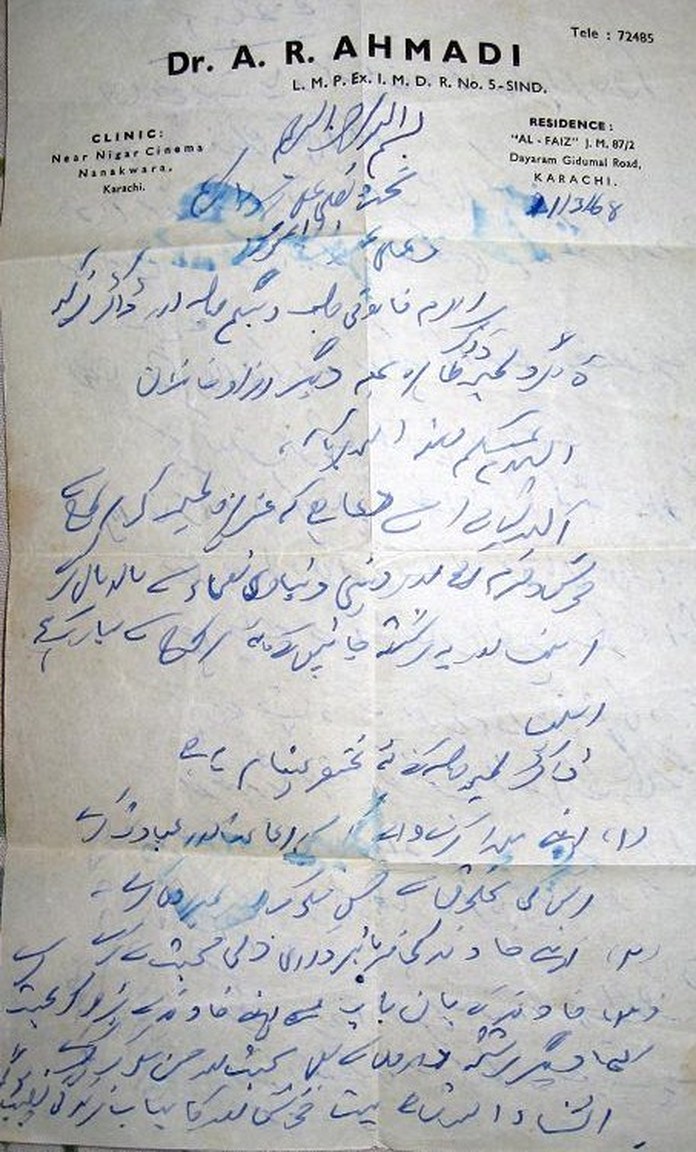 SEHRA
by the Mother and the Father of the Bride 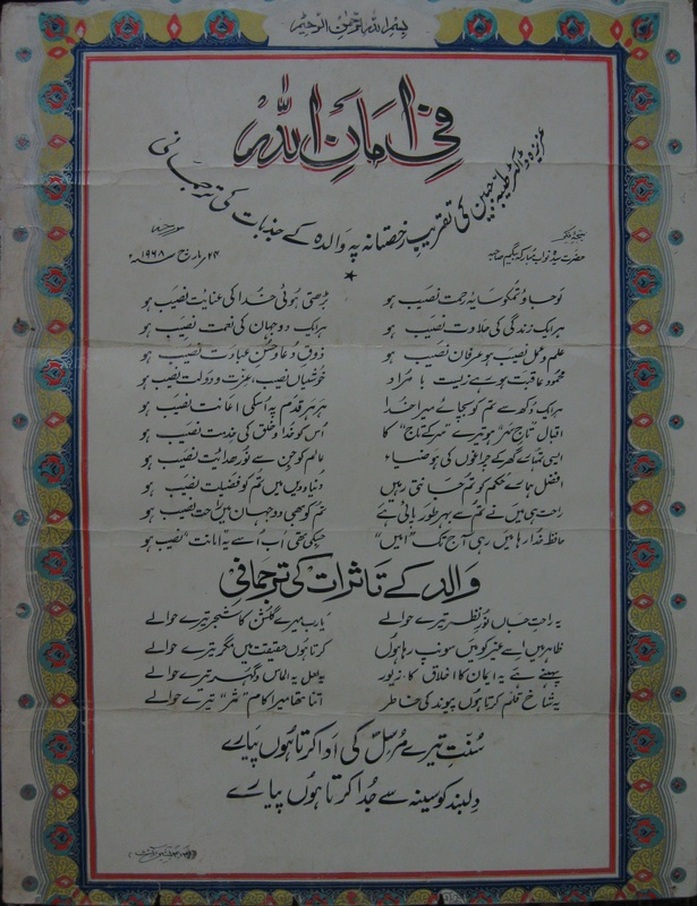 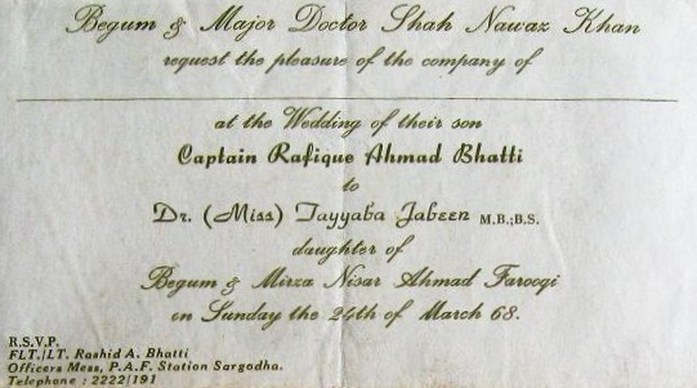 The Walima reception was held at 11/26 Dar-ul-Rehmat Wasti, Rabwah
The wife of Mir Daud Ahmad sahib (RA) did the make-up for Dr. Tayyaba Rafique sahiba 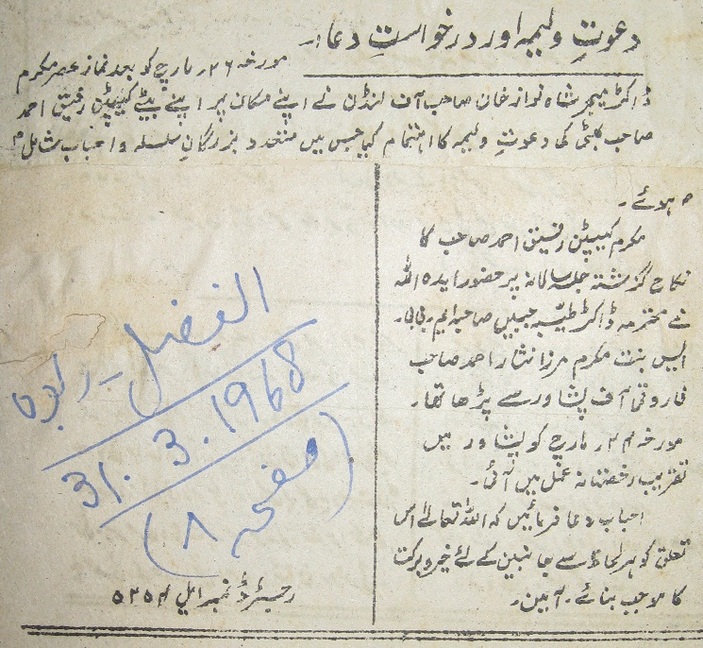 The Wedding Gift by her Father 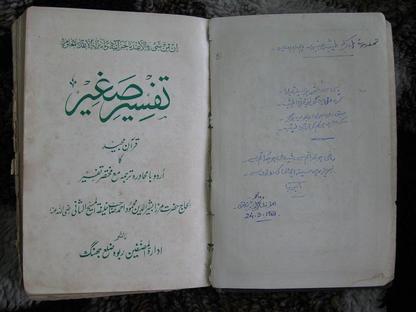 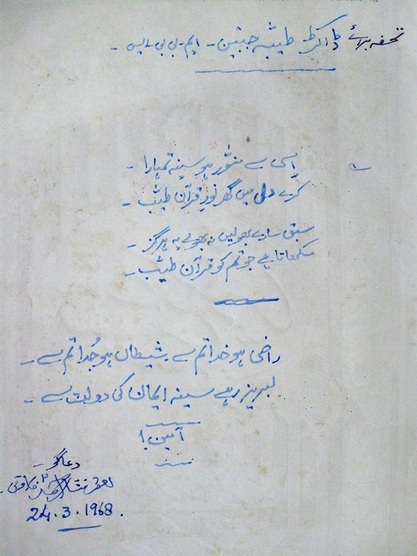 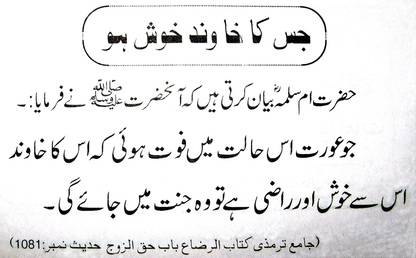 A True Friend Indeed
Testimony of her friend Dr. Shafqat Malik
She sent a photograph of her with an Urdu verse on the flip side
on August 22, 1962 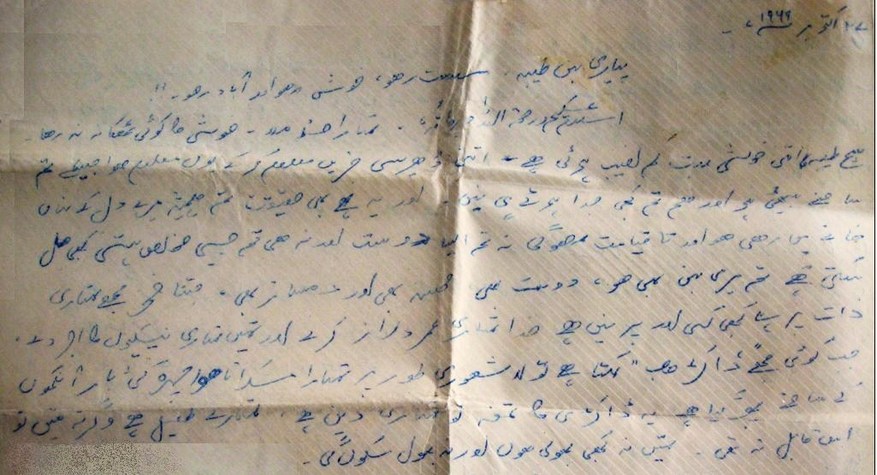 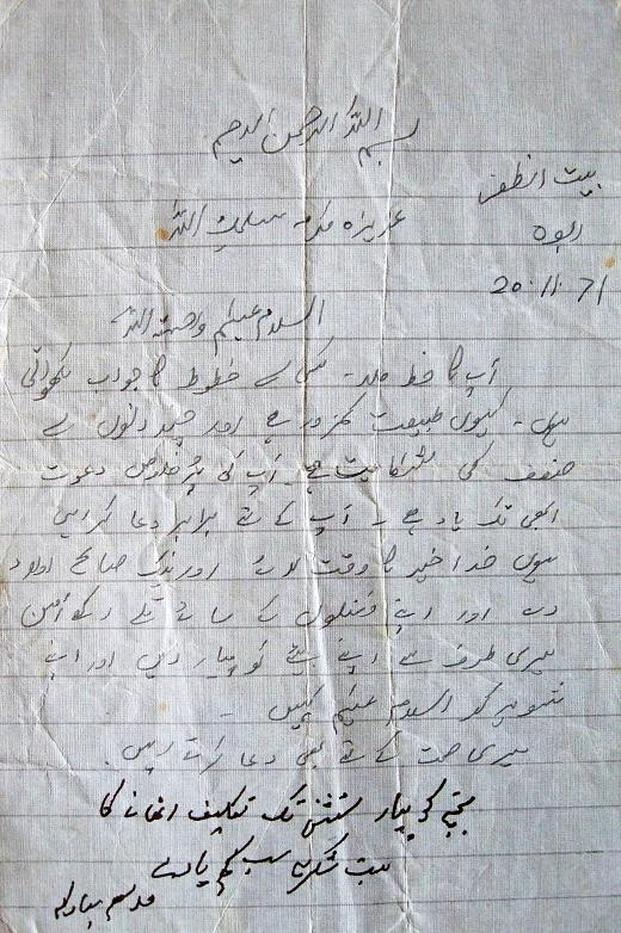 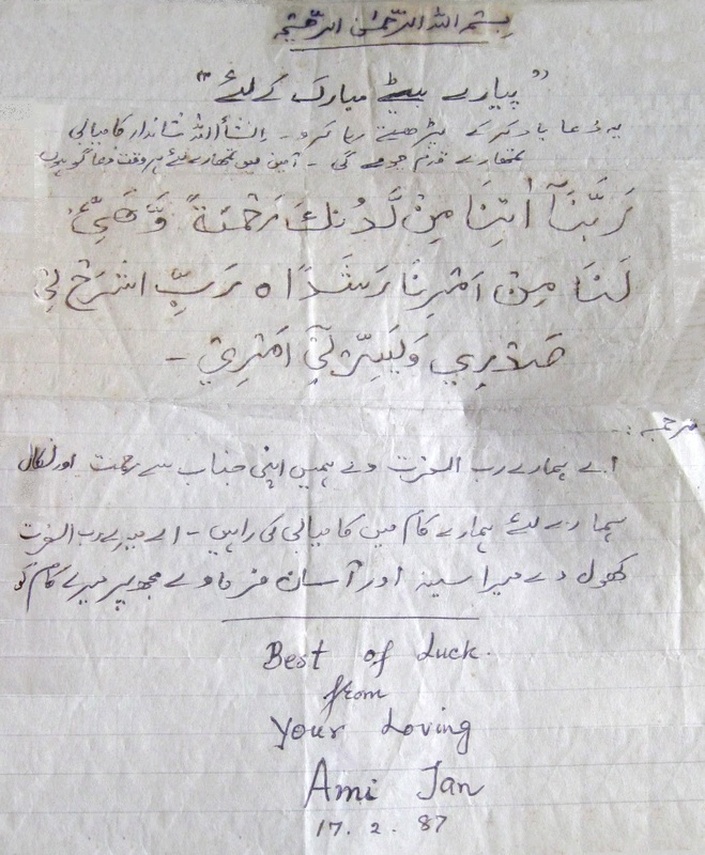 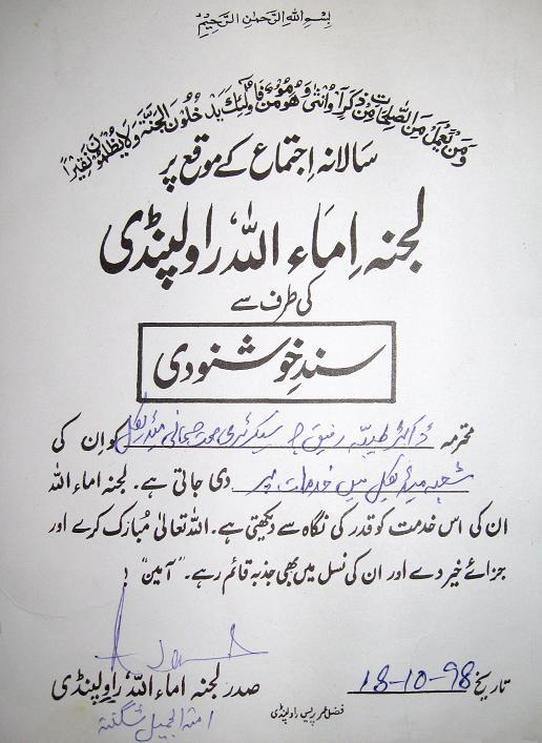 Her sentiments as a
Mother
sent in the form of a poem
to her sons Farid & Mubarak when they were in Libya
Letter dated: December 3, 2002 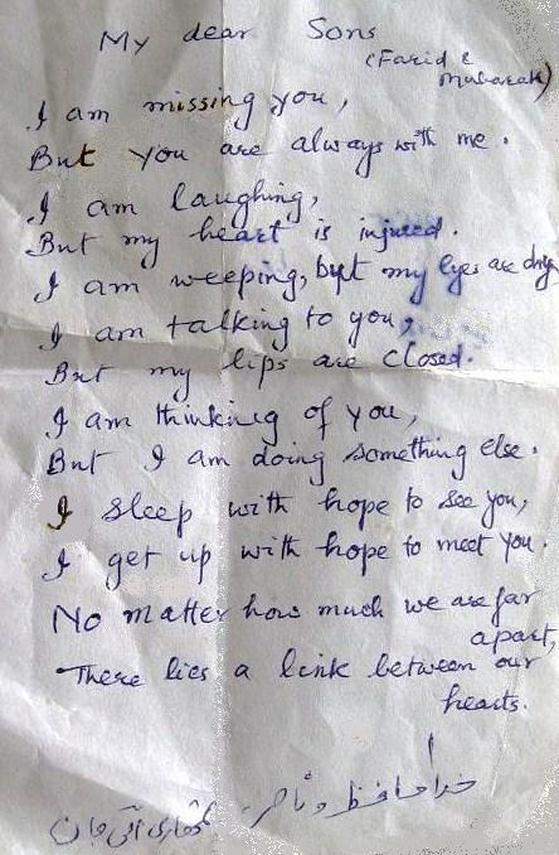 Her Living Will for her Children
A poem was published in Al-Fazl on Dec. 7, 2009
The theme in there so perfectly depicted her gradually worsening Parkinson's Disease
that she would read it many a times and thought as if this has been written regarding her condition.
She gave a photocopy of it to her sister Dr. Zakia around Dec. 17, 2009 while she was in Rawalpindi for the graduation ceremony of her niece, so that she can convey this message to her children.
Her children received the E-mail attachment on Jan 6, 2010 from their aunt on behalf of their mother.
She left the earthly abode exactly 3 months later on April 7, 2010
May Allah Grant her Eternal Peace, Amen! 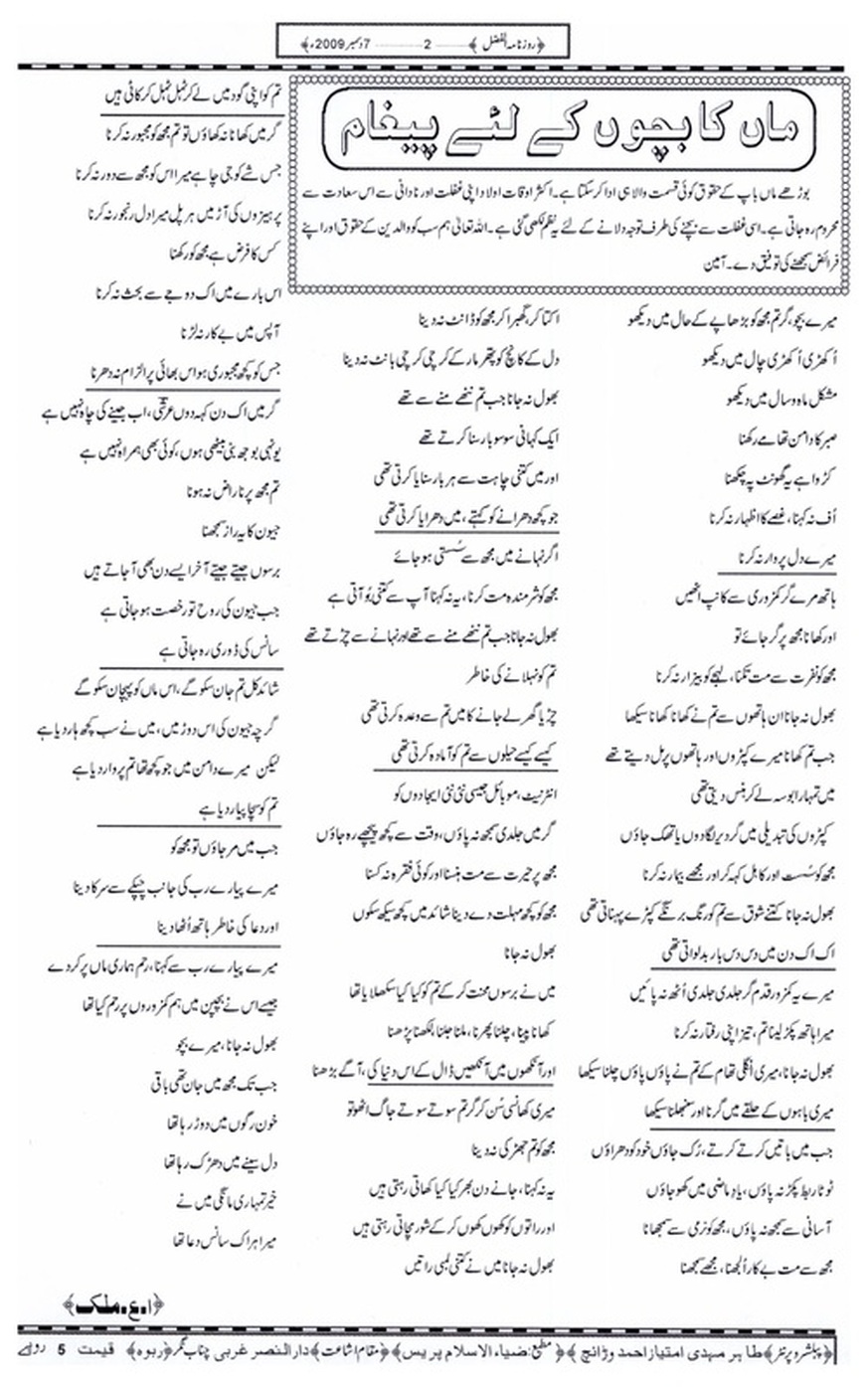 Dr. Zakia Shameem sahiba completed the English translation of this poem
on the day her sister departed 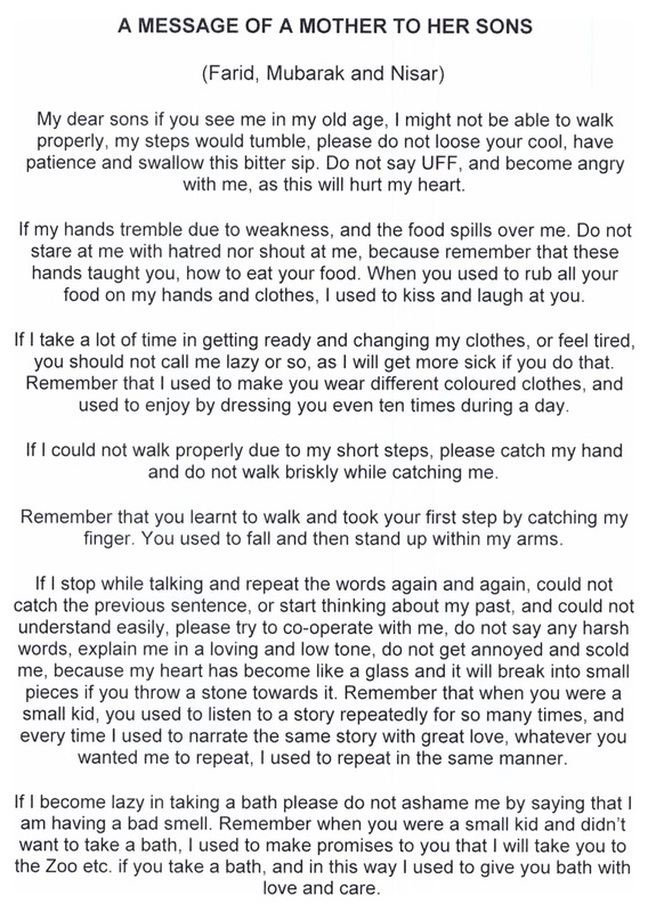 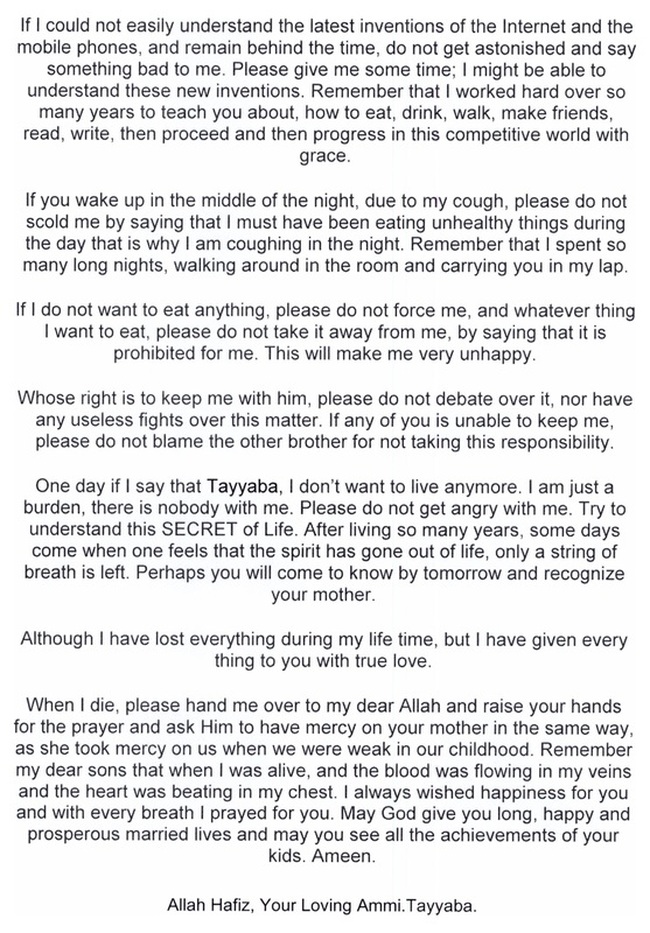 Announcement of her death in Al-Fazl
Her Funeral Prayers were offered in Rawalpindi and in Rabwah and in absentia at Chino, California, Chicago, Illinois and Baltimore, Maryland, USA.
Calls for condolences were received by her husband from all over Pakistan as well as from Canada, USA, UK, Norway, Japan, Kenya, Australia and UAE

The Funeral and the Burial

There are no words to express the sorrow that I feel for the passing of our beloved sister. Seeing her funeral pictures was a hard experience, I felt like hugging all of you and cry, instead I was alone and could not touch her or anyone. She looked so peaceful and the pain of letting her go was written on everyone's face. She was indeed an angel who passed this world for a short time and in this short time all she did was spread comfort, give joy, support where ever, cradled three beautiful babies, love unconditionally, helped bring so many babies to this world and never thought about herself for a single second. Never asked for recognition. As if she was on a mission to continually do good. WE will not be able to find one person in this world that she offended or was mean to. Now that she is gone I wonder can we even try to be as selfless as she was, at least I can speak for my self that I have already failed. Wow what a loss, we had an angel for a sister and we took her for granted. May Allah forgive me for my shortcomings.
The thing that struck me the most out of all the pictures was her grave picture with her name plate. Years ago I saw that very name printed in very bold letters in many news papers around the city, She topped the board F.Sc. exam. Our father was not home that day, the result was out and we had no idea how to find out what happened. My younger sister and I were sent to the newspaper stand to get a paper. (we were little at that time, means no burka ) you know what the stands are like on the result day. We could not even go near the papers, but we saw that big bold name on the front page of papers that people were buying, We both knew that was the only Tayyaba Jabeen our sister so we ran home and started jumping like crazy screaming saying she is first amongst the boys and the girls. My father cut his hunting trip short and the rest is history. That was a sweet moment for our family. This katba on her grave is a very bitter pill to swallow.
It is the will of Allah and we have to accept. It is also very comforting to know that she has three beautiful sons who will be her sadaqa e jariya. Her husband was pleased with her and no one in the world has any complaints against her. She is gone to the place she belonged in the first place. My sister rest in peace, play with your angel friends until Allah have mercy on us and we will see you in Jannah. Inshallah.

The Love for her Profession
&
The testimony of her Last Patient

The sentiments of her sons, expressed so beautifully by their aunt
Dr. Zakia Shameem sahiba in her poem 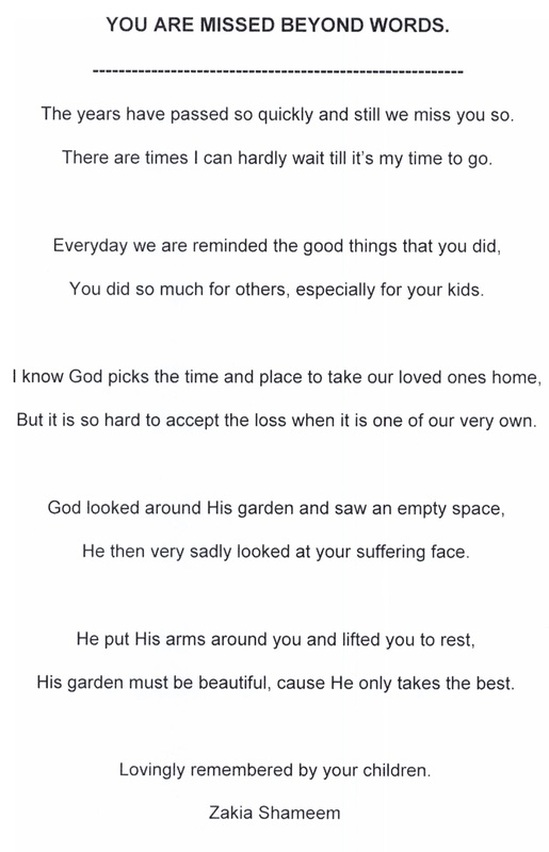